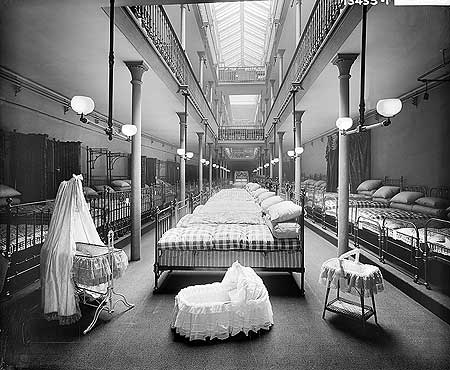 A History Of Brass & Iron Bedsteads

The metal bedstead, usually of brass, or of brass and cast iron combined, was first produced in large numbers during the 1840’s in England.  The
reasons for its appearance were largely two fold.  Firstly, from the early years of the 19th century, improvements occurred in the metallurgy industries, resulting in metals of a higher quality, available at cheaper prices.  Secondly, there was a growing awareness of the need for hygiene and sanitation; during the Crimean war, Florence nightingale focused the eyes of the world upon the urgent need for improved hygiene on her hospital wards.  The four-poster wooden bed, which has been prevalent up until the mid 19th century, had the disadvantages of harbouring bed bugs, and as late as 1814, the royal position of ‘Bug Destroyer to His Majesty’ continued to be appointed.

Metal was first applied to a limited extent to the joint sections of the wooden frames but  eventually, wood was replaced entirely by metal; favoured for it’s cleanliness, and considered for obvious reasons, especially in large towns ‘a change for the better’ (Hints on Household Taste by Charles L. Eastlake, 1878).

From about, 1812 – 1831, seven patents were granted for the production of metal furniture and bedsteads, basically constructed by means of a series of interlocking hollow tubes of brass, iron, and steel, which had combined advantages of being lightweight, clean, and inexpensive.

One such patent, for extending tubes, taken out by William Day in 1826, enabling the dimensions of metal furniture to be easily altered. Another patent was granted to Samuel Pratt in 1825 for metal rods on which to place bed hangings, and another to Thomas Briedenback in 1827, for a close mesh metal wire for bed enclosures, preventing the ‘annoyance of mosquitoes and other vermin’.

By the 1840’s the Birmingham firms of R W Winfield, and Peyton & Harlow, had both received patents for the production of metal bedsteads, the former specialising in tapering metal tubes.  From this time onwards, brass & iron constructions were gradually to replace those of rosewood and mahogany and during the mid 1850’s, were produced in the 1000’s and later sold in the showrooms of stores such as Maple & Co and Heals & Son.

At the great exhibition held at London, 1851, the metal bedstead achieved popular recognition.  Several brass models were shown among them a very ornate example created by R W Winfield, described in the catalogue as ‘a four posted brass bedstead clothed in green silk, the metal work in the Renaissance style, with figures, foliage and scroll work introduced.  Highly decorative, fine quality examples were a speciality of this firm, produced from the late 1840’s and appealing greatly to the eclectic, grandiose tastes of the Victorians.

By 1875, some 6000 Brass & Iron Bedsteads were made each week in Birmingham; about half of these were exported to Europe and America.  The
latter country did not manufacture such items until the late 19th or early 20th century, as evidenced by a Sears Roebuck catalogue of 1908, which newly advertised iron beds for $3.10 and brass versions, of 180 pounds in weight for $28.

In England, the greatest quantity of metal bedsteads was produced from about 1860-90,  and an enormous variety of styles were available for purchase, a number of which were illustrated in the retailers catalogues of the day.  The most ornate of these, some entirely of brass (usually cast brass for the decorative fittings, with brass covered tubing) appeared from the mid 19th century until the late 1880’s after which time a greater simplicity was maintained.

Popular designs of the 1890’s often made use of mother of pearl, porcelain and bevelled glass for decoration.  Those intended for a poorer public, or for use by servants, largely consisted of a top and end rail of cast iron, simply decorated with two brass covered rods at either end and brass finials to
adorn the four posts.

The quality of the finials varied considerably, the cheaper versions being spun in the form of large balls, with finer examples created by placing the brass in casts, sometimes formed as urn shapes of a more intricate design and characterised by a greater solidity and weight.  Several late 19th and early 20th century designs reflect Art Nouveau tastes with curving top rails terminating in floral scrolls, while those produced during the 1920’s and 30’s (the declining years of metal bedstead production) tend to be of a more geometric and simpler appearance, with square tapering tubes and sparse decoration.

Prices range as low as £350 for a very simple single cast iron models, to several thousands of pounds for extra wide, decorative, all brass versions.  In
fact many of the best example can now sell for £10,000 – 20,000 and even more.  The specialist dealer may find it necessary to replace damaged finials or brass tubes.  Such restoration is considered acceptable, and even replacement of an entire top or end rail, if it has been severely damaged, does not detract from the desirability or its price.

Side rails are an essential feature of the metal bedstead, if it is to be used, as they connect the top and end sections, proving a frame on which to place the mattress and the base.  The interlock at either end (no tools are needed, the whole process taking no more than a few minuets) and it is vital to ensure that these fit exactly.  It is very difficult to find a duplicate pair of side rails, should the existing ones be damaged or inefficient.  Of course, the
specialist dealer will ensure that the ‘fit’ is correct.

Although antique bedsteads can still be found for purchase, their numbers are diminishing.  As a result, reproduction brass bedsteads have become available for purchase.  These are today produced in a variety of styles, from the simple to the highly ornate; although they can be as expensive as their antique counterparts can, the reproductions appear to sell well, but without the charm, quality, or investment value.

Visit Us In Store